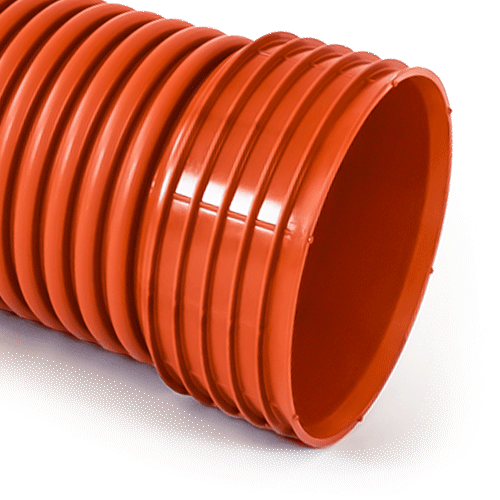 The system of K2-Kan corrugated pipes and fittings are made from PP, in terms of their functional properties and the possibilities of conducting earthworks and assembly works related to laying pipes in the ground is currently the optimal sewage system allowing for the forecast that sanitary, drainage, general or industrial sewage systems are laid in the ground under roads with a high load or in other areas. They will be used for at least 100 years and the investment costs will be optimal.

The pipes and fittings of K2-Kan system in accordance with EN 13476-3 are qualified for structural (profile) pipes of type B. The novelty of their construction is that the outer wall has at the top of the low wide rib made additional roof reinforcements that take point pressure directly on the wall. outer tube causing its deformation, while preventing the internal wall from deforming. The outer wall further has a low and wide wave shape with narrow narrow grooves, where in the last groove an elastomeric gasket is provided to connect them. With such a tube construction, there is a favorable course of the increase in circumferential stiffness when the thickness of the outer wall is changed while the thickness of the inner wall remains constant. Depending on the thickness of the external wall, peripheral stiffness in the range of SN = (4÷16) kN/m2. 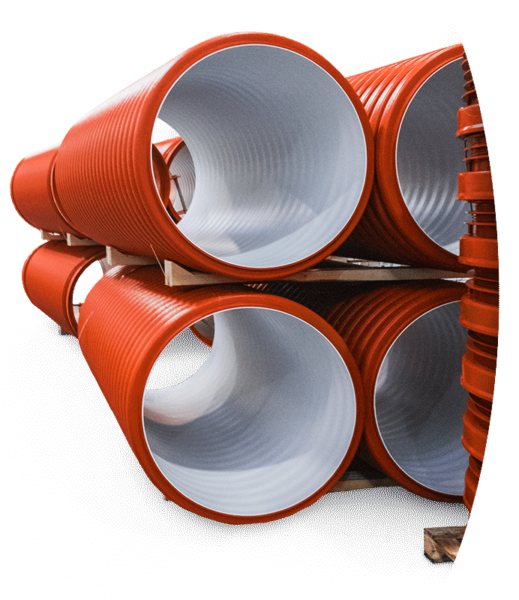 All structural PP pipes and fittings (corrugated or profiled) have a very expanded wall height compared to plain-walled (solid, foamed or other structural A pipes), where the relatively thin wall thickness (differentiated depending on the stiffness) does not have such a significant impact on size of internal diameter and hydraulic calculations.

K2-Kan PP pipes (DN/ID and DN/OD) are produced by coextrusion extrusion, where two independent single screw systems plasticize polypropylene granulate (with two different colors but with similar properties), which is fed to the forming head simultaneously coaxially two pipe. The inner tube has a smooth wall, and the outer tube has a wavy-formed (corrugated) wall through a suction device. Both of these pipes are connected to each other during this hot forming by pressure forming a two-layer, well-welded wall at the connection points. The smooth inner wall is light-colored, while the corrugated outer wall is orange-brown (DN/ID 150 – 600) and black (DN/ID 800 – 1000), DN OD 160 – 400  light orange. The main advantage of this type of pipe is that with low material consumption, and therefore with their light weight, pipes with high circumferential stiffness are produced.

Advantages of K2-KAN pipes and fittings:

The K2-Kan PP pipe and fittings system is based on the delivery of K2-Kan pipes with lengths of 2, 3 and 6 m. (Other pipe lengths are negotiable). Each pipe, regardless of its length, has a goblet at one end and a gasket at the other end in the last groove. The offer also includes the bare-end pipes (without a chalice) for connecting to a two-sleeve connector.

K2-Kan corrugated pipes have independent dyeing of both sides in the whole mass in a very clear and homogeneous way. The color of the external walls is orange-brown (DN 160 – DN 600) and black (DN 800 – DN 1000) adapted to the commonly accepted color of sewage sewage system laid in the ground. However, the color of the internal walls is light-gray adapted to a good reflection when inspecting cables laid in the ground controlled by means of passing in the cable of CCTV cameras or video cameras.

In addition, the K2-Kan corrugated pipes thanks to the outer wall construction show great stability in the presence of local point loads, because the external wall absorbs uneven loads through its deformations.

K2-Kan sewage pipes, although they are intended for gravity, are also characterized by good resistance to local water pressure when using high-pressure flushing equipment (120 bar). Although the K2-Kan sewage pipes are designed for non-pressure work, however, long-term pressure of water up to 2.5 bar does not damage them or reduce their durability.

The inner surface of K2-Kan PP pipes is very smooth. The absolute value of the coefficient of roughness is K=0.00011 mm. (Research was carried out at the Central Mining Institute in Katowice). Smooth internal walls are not conducive to the possibility of depositing heavier fractions contained in wastewater as a result of sedimentation. K2-Kan cables have a high self-cleaning ability.

K2-Kan corrugated pipes and fittings can be easily maneuvered between the stiffening plates of excavations. Making push-in connections with elastomeric seals is also very easy even with larger diameters. In the case of deep excavations, especially in areas with shallow groundwater, where the lowering of the groundwater level is required for the time of digging, the front of works can be carried out with short sections.

It is estimated that thanks to the small weight of pipes and the ease of their joining, the installation of wires should give savings resulting from labor-intensive work by about 20-30%. Earthworks and assembly works when laying pipes and fittings of the K2-Kan system should be carried out in accordance with the guidelines of EN 1610 and EN 1046.
In order to provide services at the highest level, as part of our service we use cookies. Using the site without changing the settings for cookies means that they will be placed on your end device.

If you do not agree, please kindly make changes to your browser settings. [Cookie_link]
[Cookie_button]