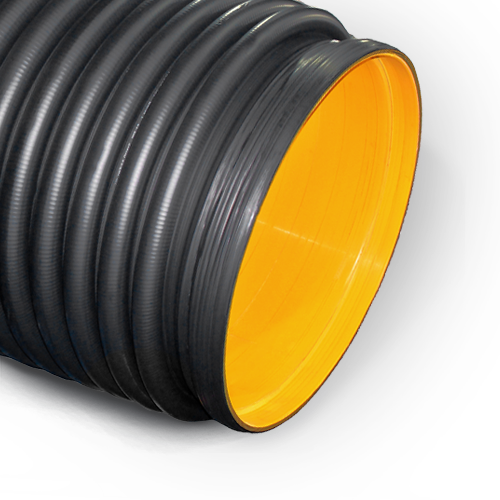 K2-Kan XXL pipes are produced by coextrusive extrusion, where two independent single screw systems plasticize polyethylene granulate (of two different colours but with similar properties), which is fed to the head forming a specific profile, and then by spiral winding on the drum a certain diameter extruded together during the production of profiles forming the structural structure of the wall with a smooth inner surface and spirally profiled outer surface. The smooth inner wall is yellow, pale gray or blue (depending on the purpose). On the other hand, the corrugated outer wall has a black colour to counteract UV radiation when the pipe is not buried.

The main advantage of this type of structural pipes is that with low material consumption, and therefore their low weight, pipes are produced with good strength properties, allowing to carry large loads. A pipe with a structural wall compared to a pipe with a monolithic wall, with the same circumferential stiffness, is lighter by 65%. K2-Kan XXL pipes can be precisely matched to the specific requirements of the project. The K2-Kan XXL system pipes made of polyethylene or polypropylene are produced with peripheral stiffness from SN 1 to SN 32 kN/m2 according to EN ISO 9969 (while according to DIN 16961, this rigidity ranges from 4 to 128 kN/m2).

K2-Kan XXL pipes are very light compared to pipes with monolithic walls with similar static properties, the use of pipes with structural walls allows to reduce the pipe’s weight to 65% (15-20 times lighter than stoneware or concrete pipes).

Resistance to abrasion is one of the most important features that distinguishes PE pipes from other materials used to build pipelines. Thanks to their properties, K2-Kan XXL pipes are used for transferring rainwater effluents containing significant quantities of sharp sand and other highly abrasive media.

The K2-Kan XXL system is highly resistant, which means it is much more resistant to loads and deformations. Deformations can occur under the influence of the ground movement process, while not breaking the material, thus ensuring further continuity of the pipeline operation. After these processes have ceased, the pipe returns to its original shape.

According to the developed method of accelerated aging in laboratory conditions and by comparing test results to changes occurring in natural conditions, it is already possible to predict that the service life of sewage pipes made of polyethylene and polypropylene laid in the ground should be at least 100 years.

K2-Kan XXL is extremely resistant to impacts even at low temperatures, it also ensures impact resistance during transport, installation and assembly in difficult ground conditions and further operation.

Chemical resistance in a wide range of pH, corrosion caused by the action of medium such as municipal sewage, rainwater, surface water and groundwater, enables the transfer of chemically aggressive wastewater and installation of pipes in chemically aggressive environment, the total resistance of pipe surfaces to corrosion – destructive impact of groundwater , therefore, the pipes do not require protective coatings.

Chemical resistance in a wide range of pH, corrosion caused by the action of medium such as municipal sewage, rainwater, surface water and groundwater, enables the transfer of chemically aggressive wastewater and installation of pipes in chemically aggressive environment, the total resistance of pipe surfaces to corrosion – destructive impact of groundwater , therefore, the pipes do not require protective coatings.

In the production of K2-Kan XXL pipes, the resulting waste is 100% recyclable through a technological rebound. Polyethylene and polypropylene pipes and fittings laid in the ground are biologically and chemically inert to groundwater and are resistant to aggressive wastewater, as well as sealed systems that prevent the penetration of sewage into the ground, which could be considered as poisoning the environment. Polyethylene and polypropylene, is 100% recyclable, waste is not intended for incineration or depositing in landfills, but in the case of (accidental) combustion, no gases are released harmful to the environment or health.

In order to provide services at the highest level, as part of our service we use cookies. Using the site without changing the settings for cookies means that they will be placed on your end device.

If you do not agree, please kindly make changes to your browser settings. [Cookie_link]
[Cookie_button]